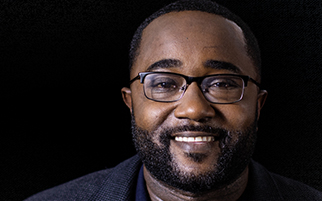 Would you have believed in Antong Lucky? Most would say no – including Antong himself, who founded the Dallas Bloods gang. But a few people said yes, which inspired him to turn his life around and emerge as a leader in the movement to heal America.

Upon the first look at Antong Lucky’s background, would you have believed in him, or in the possibility of what he would become?

Most people would say no, and perhaps Antong would not have believed in himself if he would have believed the judge who labeled him as a “menace to society.” But a few people said yes. It inspired him to believe in himself and to turn his life around.

Now, Antong is inspiring people across the country to see the good within themselves and others.

Raised in the projects in the worst part of Dallas, Antong was on a pathway that led from poverty to violence from the day he was born.

Before he turned 1, his dad was sent to prison for 50 years. Before he turned 10, he got involved with drugs. Before 15, he founded the Dallas Blood gang and ran the city’s roughest streets. Before 20, Antong was behind bars and was positioned to run the prison too.

But it didn’t happen that way. When he was 21 and in prison, an older man named Willie Fleming pulled him aside and helped him see what he had always missed.

“You are a leader,” Willie said. “And if you could lead people to do wrong, you could also lead people to do right.” Since those were words that Antong had never heard, they rang loudly in his mind and would become the springboard for his transformation.

Just a few weeks after Antong left prison, it was another man named Omar Jahwar that would help Antong answer the questions of how and what next, and who later became his mentor.

Omar taught Antong how to heal the streets he used to destroy. Antong became an “Urban Specialist,” the name of a local nonprofit Omar founded in the late 90s to bridge divides and curb senseless violence in urban communities. Now he’s devoting his life to helping others avoid the choices he once made.

Antong works in schools, where he shows kids they can get more from good grades and good behavior than anything gangs offer them on the streets — and he and other urban specialists work outside of schools, too, rolling up before the final bell rings to stop gangs from recruiting kids right out of class.

He also goes into broken and violent communities, where he brokers peace deals between warring gangs and serves as a bridge between law enforcement and Black neighborhoods when tensions flare.

Antong Lucky is a leader for good. But as he would tell you, he’s only getting started.

Antong considered Bishop Omar to be his mentor, brother, friend, and spiritual guide.  With Bishop’s passing on March 11, 2021 following a long battle with complications from COVID-19, Antong is committed to continue and lead the work that his mentor began, succeeding him as president of Urban Specialists and now co-chair of Heal America.

Just as Antong found inspiration in Bishop Omar’s work and leadership, he’s now taking up the cause and working to inspire others with the lessons learned from his own life.

He believes his lived experience offers two insights that are key to the fight for racial justice. First, redemption is real. And second, it takes courage to believe in people who have given you every reason to doubt them in the first place.

Antong’s life is proof that today’s enemies can be tomorrow’s allies.